In the autumn I get more times into crime story reading mood than usual (even though I’m really a huge fan of the genre, so that’s something I do normally as well), so at this time of the year a cozy mystery is something I found myself contently reading. A hot coffee and a book, under a blanket… that’s the dream! And I managed to live it for a little time, even though these are a very stressful and busy couple of weeks for me.

I got ‘Running from Scissors’ by BooksGoSocial and NetGalley in exchange for my honest and unbiased opinion. 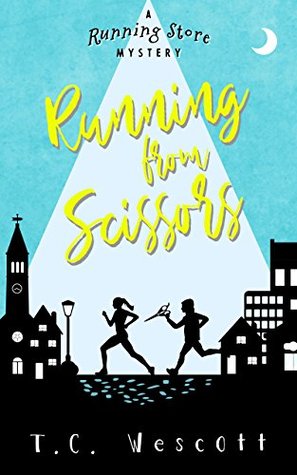 I went on a ‘read now’ hunt on NetGalley earlier this week, and this was one of the books I got. I was a bit hesitant to click in its case, because there were very few reviews there (even though the book was released in the summer), they weren’t very long, and only two of them were outright positive. In spite of all this I somehow felt a strong attraction to this book, I wanted to figure out what it’s like. So I clicked.

Fortunately, there were more reviews on Goodreads and Amazon, many of which were very flattering, so I couldn’t help but start with this one.

I wasn’t disappointed. It was a quick read that I honestly enjoyed! The only thing I had actual problems with is the occasional mixture of present and past tense. That was irritating, but not so frequent that it would take away from the enjoyment and appreciating of the novel.

This book is a healthy mixture of a classic crime story’s slow flow and modern fiction’s easy going. The author took the recipe of those clever stories of simple times, of mysteries of the Golden Age, and put it all in a modern small town setting. At first I thought this is a weird concept but it worked so good! As a huge fan of those classics, I was certainly pleased with the way this story was written. The unfolding of the mystery, the happenings, the long revealing towards the ending, the atmosphere, everything felt a bit like in an old British suspense, yet it didn’t feel off for being set in today’s America. It was about thinking and being smart, like in the old days when there was time for things like this. I found it great!

I put this book into the ‘classic crime’ category besides cozy mystery because though it is not an actual classic, but it has the major attributes of those.

I loved the characters! I have to admit I’m far from a runner (in fact that is probably the only kind of movement that I would NEVER EVER be persuaded to do…and believe me, that’s something. I’m quite lazy when it comes to not-mental work), and I thought I wouldn’t be able to appreciate all this ‘runner society’ in this book, but I found myself falling in love with all these quirky characters, and I could relate way more than I thought I would. I loved the main character, Lacy, her friend Stax, and don’t get me started on the old lady who’s kind of a mixture of Miss Marple and her creator, Agatha Christie! The others were great as well, even those that we didn’t get to see a lot were ones that I thought I would want to know more about.

I know objectively this book is probably not a full 5-star one (though since it’s a debut fiction novel, and only the first of a series, I’m sure this can change in the future), but hey, I felt like it was! I found myself intrigued and invested. So…

I mostly cling to the actual classics when it comes to the classical crime style, so I can’t be 100% sure, but I think this book is at least a little bit unique..? I know I haven’t read any new books before that managed to mirror the atmosphere of an old classic crime story this much.

If you’re a huge fan of classical crime and unfortunately have read all books of the genre that rest on your shelves, I think this book would be a great next choice of reading for you!

As I said above, I became invested, more invested in fact than I first expected. So, yes, I will read the next volume when it comes out. I’m actually waiting for it.

Are you a fan of crime stories like me? If yes, who is/are your favorite author(s)? Do you like classic crime? I can’t wait to discuss!

8 thoughts on “‘Running From Scissors’ by T. C. Wescott”