If you’re familiar with the classic children’s novel ‘Pollyanna’, you know very well what the so-called ‘glad game’ is. () If not, I’ll tell you in a nutshell: it’s making yourself think of something you can be glad about, even in the worst of situations. It’s basically thinking positive… it’s a game of optimism.

So when I read the title and the description of ‘Sherlock Holmes and the Glad Game’ () I knew that I must read a book where Sherlock meets this game and this girl! Cynical, rational Sherlock and naive, optimist Pollyanna interact…? It must be hilarious!

I was approached by the author Matt Ferraz (Facebook/Linkedin/Twitter) and was provided with a free e-copy of the book in exchange for my honest opinion. 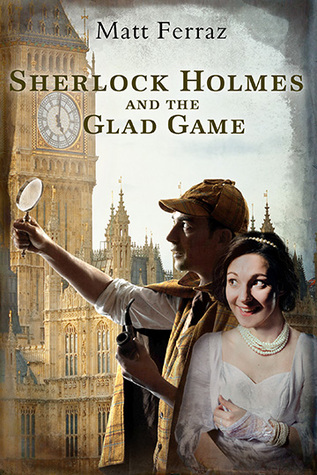 As I said, the author contacted me, and I was immediately intrigued! I had to see how this weird but wonderful idea unfolds. I started to read it on the same day I got the e-book, but after the first, or the first two chapters I stopped. I was of course familiar with the Sherlock Holmes stories, but I’ve never read Porter’s Pollyanna series. I realized that if I wanted to really understand this book and the character Pollyanna, I had to read the latter one as well. So, I put ‘Sherlock Holmes and the Glad Game’ aside and went on reading ‘Pollyanna’ and ‘Pollyanna Grows Up’. THEN I picked this one up again. Much better. Less confusion, more appreciation. (Actually, I don’t think I was really confused not having read Pollyanna – this book is mostly understandable without it, but I think it’s necessary to know her story and character if you really want to be able to appreciate this idea of a story and meeting of characters.)

This was an entertaining book! I first was afraid that Sherlock and Pollyanna – these two things wouldn’t mix very well, the originals being so different, but it actually worked quite great. The style fairly imitates that of the original Sherlock’s and it goes unexpectedly well with Pollyanna and the mystery she brings to this novel. Pollyanna doesn’t lose herself in spite of it being more of a Sherlock Holmes than a Pollyanna story. The way she speaks stays true to her original version, it’s absolutely believable that it is the same person, yet she somehow seems a bit more realistic. I actually liked her character better here!

I expected more actual interaction between Sherlock and Pollyanna, but it turned out to be more subtle and, I think, also more realistic than dramatic – which is definitely something I like. The mystery is good and interesting. The detective work/thinking and solution is more on a human scale than the usual ‘Sherlock brings his brilliance’ thing, but that was okay with me.

Also, I have to admit that I was a bit confused for like the first half of the book about how Pollyanna’s life turned out since the ending of ‘Pollyanna Grows Up’, because it didn’t seem to add up. I save you the worry: it does. It’s all explained in due time.

Just read the title! Isn’t it enough? It’s such a unique idea to bring these two very different classics together and see what happens. And it works great!

Everyone who’s a fan of either/both Sherlock Holmes and/or Pollyanna. Also, anyone who likes classic/cozy crimes. This one’s really good! 😉

‘All You Need Is Love’ by The Beatles

A new author to watch out for upcoming books! 🙂

Are you a fan of Sherlock Holmes? Have you read Pollyanna as a kid (unlike me)? What do you think about how these two would mix…? Let’s talk! 😉