What better is there in a terrible, cold, wet weather (when all day seems to be evening and you can’t decide if the thing falling from the grey clouds is rain or snow) than taking a journey into a mystery novel set in sweet and fun Hawaii?

Well, I can think of a lot of things that are great to do, but this was definitely one of them!

I got this ebook for the purpose of this blog tour and this is my honest and unbiased opinion. 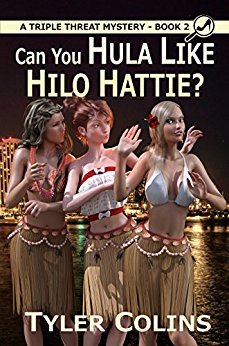 I was contacted by Jina who organized the tour. She kindly asked me if I wanted in, and after reading the description, I did! Though I have to admit that I became a bit discouraged when I saw the cover. I just… find it not so… nice. That being said, I rather listened to the blurb, so I ended up reading this mystery book!

(By the way, Jina is a writer, too, and I’m about to read and review her book sometime in the near future, too – I’m so sorry that I haven’t done so so far. But soon, I promise! Until then, please, take a look at her site! You might end up wanting to read something she wrote, too. 😉 )

Fortunately, this was a case of ‘don’t judge a book by its cover’. It took me some time until I became invested and really cared, but after that, I thoroughly enjoyed this journey with the three half-amateurish P.I-s! (This is their first official case.) This might be due to the fact that this is the second book in a series, though it was absolutely readable as a standalone. I understood everything, even though I haven’t read the first book; the only thing this made me was even more curious about the other volumes.

The story kept me interested and I enjoyed the ride figuring out what the hell was happening in the background and why. This book had touches of lightness, in a kind of chick-lity way, because of the setting and the personalities of the three freshly starting detectives, but it doesn’t get too much and is well-balanced with heavier, murder and investigation related stuff.

This book is well-written, and I found myself many times thinking ‘wow, this is so nicely worded’, though I learnt more about the clothing of every single character (major or minor) than I would’ve wanted to. The characters were very likable, and I couldn’t help but wanting to read more about them. I loved their relationships, too, and I see potential there for the further novel (). I liked the tension and the love and the aversion, and all the different kind of feelings that the different characters made me (and possible the main character Jilly…JJ.) feel. There’s one thing, though, that I have to note: though I liked Cash’s character, and in general his interactions with JJ were exciting and intriguing, there are aspects of their relationship () that are rather worrisome. I don’t want to say more because, well, spoilers, but I felt like I have to say this.

All in all, I really enjoyed this book, the mystery, the investigation, the characters. This is a fun one!

I liked this half-amateur/half-professional detective style. This book is like a border between a cozy and a hard-boiled P.I. mystery. This is not the first case the main characters find themselves in the middle of, but this is their first official P.I. case, and they still don’t know many things. They’re more than mere amateurs, but they still have a lot to learn. And they’re… well, delightful.

Lovers of cozy mystery. For those who like both mysteries and women’s fiction, this book can be a hit, as well! And if you’d like to experience a crime investigation set in Hawaii.

Yes to reading the other books in this series!

This is almost the last day of this tour (the last being tomorrow), but please, check out the other stops, if you have a little time! 🙂

4 thoughts on “BLOG TOUR: ‘Can You Hula Like Hilo Hattie?’ by Tyler Colins”