After reading several mysteries and Christmas themed books (for some reason I read more of the first ones when I feel like wrapping myself up in a blanket and just watch the cold and dark weather from the inside), I decided to mix it up a little, and I chose the next book from my NetGalley pile that gets published. It seemed like a nice change, yet it sounded like one that would still not be too much during the rest of the holidays.

Well, I was wrong. This book had nothing to do with that cozy tea drinking holiday feel I imagined myself to be reading. I caught up, though, so after the first couple of pages it didn’t bother me anymore. I have many thoughts on this one, they have created a complete chaos in my head, but I do my best to conduct them to you. Maybe a cup of coffee would make you good while reading this.

I got this book from Twin Rabbit Books and NetGalley in exchange for my honest and unbiased opinion. The book gets published on the 8th January, 2019. 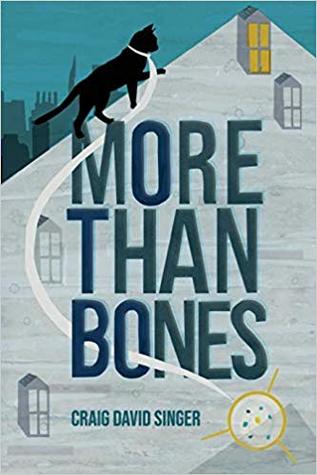 It was the combination of the cover and description on NetGalley that made me want to read this book, though after reading it, I have to admit that to me, the cover was a bit misleading. According to this cover, I thought this was going to be a cozy, nice read that warms my heart. I don’t know why. Maybe because of the cat? Or the fact that it’s drawn? I honestly have no idea. It has been on my list for a while, I got to it pretty late, at least relatively to the date I downloaded it, and I caught myself keep forgetting what it was about. For some reason I kept thinking this was a cozy mystery, though when I re-read the description I always realized that the reason I downloaded it was not that (but that I thought I could relate to the young doctor Emily). I think that’s to blame on the cover, too. The cat. That cat is mischievous! I still say that I love this cover, but I have to admit that it has nothing to do with the story in the book. In subject, yeah, but in mood, no.

This book turned out to be far more dark and dramatic than I  had imagined before starting it. Up until like 60% it was a very dizzying emotional rollercoaster, and I’m not sure I mean it in the best possible way. In fact, if I had to rate it then, I probably would’ve given a star less regarding all angle I consider when rating a book. It’s well written, and contains many great ideas, but many times I felt a bit uncomfortable reading it. It might be because after all I couldn’t really relate to the main character – I understood her thoughts, feelings and motives, but she still felt a bit stoic, stubborn and inconsiderate for my taste. She was a great character, but a person that I found not so likable. That’s probably a compliment to the author’s skills, but it made a bit harder for me to get sucked in right away. There were some happenings, as well, that I found a bit over-the-top. They had their place and reason in the story, but I felt awkward reading them. Many times I felt like this book was…too crowded.

I changed my mind by the end, though. All the different storylines were nicely wrapped up, explained or had some kind of a resolution. It was all a round and meaningful story. My problem had been for a long time that I thought this book was about something else: a combat between religion and reason, conservative people and the LGBT community, compassionate doctors and the evil board, father and daughter. After thinking about it, I decided it had been because the protagonist herself thinks this. I realized, though, that this is part of her development. She learns that it’s not a war: we’re all in this together and we have to figure it out for ourselves. We deal with things differently. There are better and worse people, and there are great and tragic things that happen to us: at the end of the day, it’s up to each one of us to decide what way we use to survive. But we all have to cope in some way.

One more thing I feel like I should mention: this book was labelled as ‘women’s fiction’ on NetGalley, that’s why I categorized it as that (too). I don’t think I agree with it, though. It might be because I don’t completely understand or agree with the concept of the genre ‘women’s fiction’. I get it, they’re books for women… but… are these books only women like? They’re certainly not. Do women not like other books…? That’s not true, either. Okay, there are genres that mostly women read (mostly, but I let it slide now), like romance… but those have a genre already! Then what is the reason this category has to exist? It doesn’t make any sense… Anyways, even if I accept that it does exist, I still don’t understand why this book is labelled as such. Is it because the protagonist is a woman…? Or because the topic of breast cancer (which comes up often in this book) is something that only women can be interested in? (People, please, learn already that it’s not the case! It DOES affect men, too. Indirectly, too, but they can have it as well. Rarely, but it’s possible. We’re all in this shit together!) What is so ‘girly’ in this book?

I actually think that if it’s labelled women’s fiction, it should be labelled LGBT, as well. Either both or neither.

Until like half of the book I thought they were a bit stereotypical, but after reading the whole novel, I honestly think that the best thing about this book is the character development! By the end they all get to be like whole, real people, and most of the ‘recurring’ characters get their own little story in the book: they all have something to live through, conquer, cope with and learn from. Even if it’s only a small thing.

The other thing I should emphasize is that like half the characters are gay, and I found it awesome! It’s completely realistic because they’re mostly one community of closer and not-that-close friends, so it’s not forced at all…yet it gives place to awesome things – like several times people are actually considered gay until said otherwise. It’s like an opposition to the real world, yet it’s still something that, under the given circumstances, could happen in real life.

The way the hospital life is described and shown is pretty accurate, too. I found it refreshing. (It turned out the author’s a physician. Among other things. That explains a lot.)

You, if you’d enjoy reading about how a young woman finds peace of mind in the middle of the chaos people’s beliefs and fallibleness and tragic events cause. Also, if you’d like to see cheerful gay guys having dinner parties.

I’d be glad to read other books written by C. D. Singer! If he ever decides to write more. According to the description in the book, he’s very busy. He’s a real renaissance man. He sounds fun!

In what way do you cope with the struggles you come across in your life? What do you believe in? Are you a person of faith or are you a champion of science? What is your ‘calling’?

These are so interesting and important questions! I’d love to chat with you about them!

8 thoughts on “‘More Than Bones’ by Craig David Singer”