If it’s only the cover that I see, I would probably have stayed away from this one, but I’ve already read two other books by this author (see the reviews here: ‘Running From Scissors’ and here: ‘Slay Bells: A Christmas Village Mystery’), and I really liked those, so I decided to ignore it.

Let’s see how it worked out!

I got this book from BooksGoSocial and NetGalley in exchange for my honest and unbiased opinion. 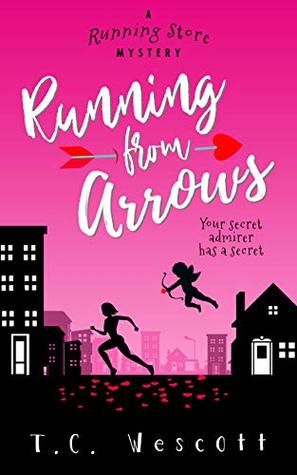 I was actually waiting for this one to be available on NetGalley, since I really enjoyed the first book in the series. It had an old-timey feeling with the structure similar to a classic crime story, and I couldn’t wait to read about the characters again. Especially Ruby, the old lady so much like in the old stories I like so much. So this one was a must-read for me.

I enjoyed this book, too, though not as much as I expected I would. The characters are more or less the same, and I like the ones that were introduced in this one (At least as characters. Some of them not as people.) The style is basically the same, so there’s not much I can say about that. It might have been improved a little bit. I feel like it did, but I can’t put my finger on what exactly makes me feel like this, so it remains a feeling.

These are the things I expected.

I’m not so sure about the story, though. After I read the ending, and learned everything about all the connections between the events, I thought it was pretty clever – but I was surprised it was clever, and I don’t think that’s so flattering. I mean, reading this book my interest kept going and coming back, because that’s how much I didn’t think about one storyline while reading about the other. There was also an escape room scene which could’ve been very interesting, had it some connection to the real mystery, but it really didn’t have, thus making it simply a distraction from what would’ve been interesting. I still think I would’ve loved it, if it were a bit shorter – half a chapter, maybe one. Not more. I think this was in itself a very good story, but the pacing was a bit off in this one.

The other reason I wasn’t so enthusiastic about this book (as the first one) is more subjective: half the book dealt with Valentine’s Day stuff, and unfortunately that’s something that I hate. This hype about V-Day, I mean. I hate that half the world goes totally crazy over it, that you must have a date, unless I don’t know what, I hate how cheesy and not honest it is. So, obviously, I wasn’t a big fan of the fact that the characters I otherwise like feel like this is such big an event. The scene where Lacy waits for the revelation who her ‘secret admirer’ is was one I felt like I was watching a movie straight out of Hollywood, and that’s not something I like. At all.

Well, that sounds like I didn’t like this book at all, which is not true! I did, it’s just so much easier to talk about the things that bother me… It’s all in comparison to the first book, which I rated 4.5.

The dragged-out revelation with everybody important sitting there and waiting for the verdict is a very good imitation of Golden Age crime fiction. Otherwise, I don’t think this one is very different from other books in the genre. Or by the author.

Give this one a try if you like both cozy and classic mysteries. I’d say to read the first book, ‘Running from Scissors’ before you read this one, though. It’s okay to read as a standalone, I think, it would be completely understandable, but I think it’s worth knowing the characters and the little town a bit better before jumping into this one.

‘Playing with my Heart’ by Kate Voegele. Yes, it’s almost purely because of the Valentine’s Day topic.

I will follow this series forward! (If there’s any more books to come.)

Have you read this book, or the others written by Wescott? What did you think?